Once again, the federal government is planning to waste taxpayers dollars on a new nuclear technology which is far more hype than substance with no working prototypes in Canada.

Nuclear is too slow to deploy to help us meet our climate targets, and it will leave us with a legacy of toxic radioactive waste.

At 2 to 5 times more costly than wind and solar energy, it makes no economic sense. Money spent on a phantom nuclear technology that can’t compete on cost with readily available solar and wind power represents critical climate dollars wasted.

Films by Black Artists in Canada

Cinema Politica is thrilled to launch our hand-picked program Bring it Black: Films by Black Artists in Canada, co-curated with Ella Cooper and Henri Pardo. From fiction to experimental to documentary, and everything between, this collection of shorts combines creative flair with political potency and unwavering voice. We hope audiences are as awe-struck as we are by this rich selection of cinema from Black directors working across the country known as Canada. This program represents many voices – revolutionary, innovative, poetic, passionate, queer, young, experienced, leading, moving, migratory, teaching, dreaming – that are part of a much larger community of Black filmmakers and we are honoured and delighted to share some of their work with you.

Join us on Twitter for important webinar on #immigration #migrants #statusnow with Jessica Chandrashekar.

Have thoughts on transit? Please join the CESAR team for a TTC forum with TTC Riders where you can discuss all the changes YOU want to see from your city transit service.

From rising costs, to increases in fair inspectors, we can all agree that public transit can only get better.

Panel discussion of the varying impacts and effects of the climate crisis, climate change policy and energy costs on Black communities across Canada.

In the Middle East, it is sometimes said that international law is closer to power than to justice. How can we change that? And what are the prospects for justice with the recent ruling by the International Criminal Court that it has jurisdiction to investigate war crimes and other serious crimes in the occupied Palestinian territory?

We will discuss next steps in the campaign to Defund the Police.

Eco-socialist Dialogs – Growing the Movement Inside and Outside Electoral Politics

The police killing of George Floyd in Minneapolis sparked a huge social upsurge in the US that spread internationally. This has led to calls to defund or abolish the police. In Canada, we have seen new momentum in confronting police violence against Black communities and an intensified challenge to the forms of racist policing faced by Indigenous community, especially at the hands of the RCMP. Speakers will look at the present challenge to police violence and consider how it relates to broader struggles for racial justice in the new reality unleashed by the pandemic.

Join our first renovictions workshop! We will cover details around renovictions, what to look out for and what tenants can do to organize to fight them!

We Do This ‘Til We Free Us

Celebrate the publication of We Do This ‘Til We Free Us with a discussion about prison industrial complex (PIC) abolition, seeking justice beyond the criminal punishment system, and finding hope in collective struggle for abolition, featuring contributors and organizers from the book.

What if social transformation and liberation isn’t about waiting for someone else to come along and save us? What if ordinary people have the power to collectively free ourselves? In We Do This ‘Til We Free Us, Mariame Kaba reflects on the deep work of abolition and transformative political struggle.

Bertolt Brecht, in the 1932 essay ‘The Radio as an Apparatus of Communication’, made a ‘positive suggestion’ to transform radio into a dialogical medium for many-to-many communications. ‘Radio is one-sided when it should be two,’ said Brecht. Brecht saw the state as the only entity capable of remaking radio in this way, but because radio’s ‘proper application’ might make it a ‘revolutionary’ medium, Brecht concluded the bourgeois state would have ‘no interest in sponsoring such exercises’.

Black Music and Politics in Toronto

A Black History Month presentation of: the Toronto Workers History Project and the Toronto and York Region Labour Council

Norman (Otis) Richmond, aka Jalali, was born in Arcadia, Louisiana, grew up in Los Angeles and came to Toronto in the 1960s as a Vietnam War Resister. Richmond was a columnist in the African Canadian weekly Contrast, and his writings have appeared in many other publications. Otis had an infamous show on CKLN (radio station), when it mattered. He produces Diasporic Music, a radio show for Uhuru Radio and writes a column, Diasporic Music, for the Burning Spear newspaper.

The Far-Right in New Brunswick

Far-right politics and violence is not only a phenomenon in the US but also in Canada, including in New Brunswick, the unceded territories of the Wolastoqiyik, Mi’kmaq, and Passamaquoddy. Join a panel on the latest research on the far-right in New Brunswick and analysis of the nature of extremism and exclusion found in the anti-bilingual rhetoric of last year’s provincial election in New Brunswick. This panel is timely as both New Brunswick and Canada begin reviews of legislation on official languages.

Governments have only about a decade to make fundamental changes if we are to avoid a catastrophic increase in global temperatures. They need to treat climate change as an emergency, akin to the mobilization we saw in World War II. A broad-based movement that unites the disparate voices of single-issue social movements into a single chorus demanding a just, green transition would impel such emergency action. Coalitions are now emerging among economic justice organizations ,racial justice movements, indigenous rights groups, peace associations, and climate and environmental groups behind some version of a green new deal. What are the chances of success?

On Property by Rinaldo Walcott

You’re invited to the virtual book launch for Rinaldo Walcott’s On Pproperty. Join us on Thursday, February 25th at 7pm EST for the event. Rinaldo Walcott will be joined in conversation by Beverly Bain and Idil Abdillahi. We’re also partnering with Another Story Bookshop as co-host and official bookseller. Tune in live for a discussion, reading, and a Q&A. You could win a copy of the book!

Rinaldo Walcott is a Professor in the Women and Gender Studies Institute at the University of Toronto. His research is in the area of Black Diaspora Cultural Studies, gender and sexuality.

The event will be streamed on Facebook Live and on YouTube. RSVP to the event, as the video link will be closer to the day of.

Voices Beyond Borders: A Poetic and Musical Tribute to Paul Robeson

We welcome you to join us for an evening of poetry and music to commemorate Paul Robeson’s vibrant, heroic voice raised in artful resistance. Orchestrated by the collaboration of trade-unionists and artists, the Peace Arch Concert of May 18, 1952, straddled borders by outmaneuvering state-sanctioned harassment, violence and silencing. This evening of poetry and music is a tribute to Paul Robeson’s contribution to that internationalism, and a celebration of Black History Month. 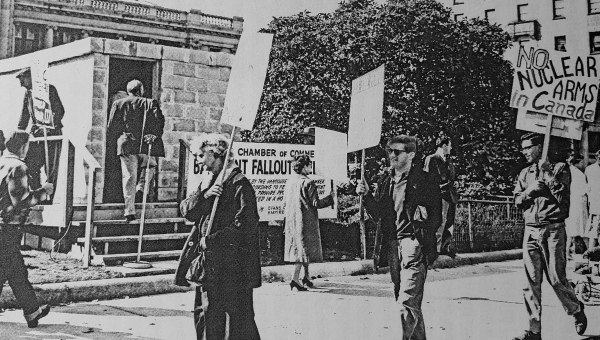 The socialist movement lost an outstanding educator and organizer with the passing of Ernest (Ernie) Tate in Toronto on 5 February. An outstanding partisan of global anti-imperialist solidarity, Ernie also contributed, with his partner Jess MacKenzie, to building revolutionary Marxist groups and to promoting socialist unity in Canada and Britain. Raised in an impoverished working-class community in Belfast, Ernie left school at age 14, taking a job at Belfast Mills as apprentice machine attendant. An avid reader and a rebel at heart, Ernie sympathized – unusually, given his Protestant background – with the Irish republican movement. 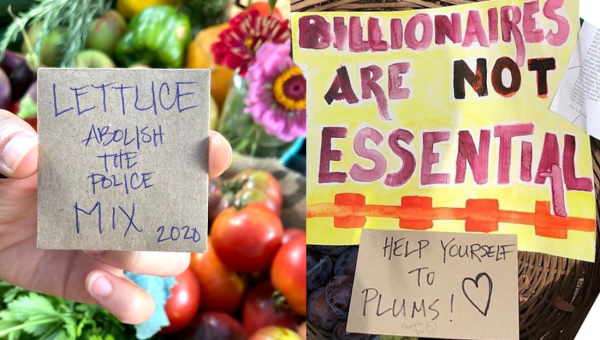 At any given Black Lives Matter (BLM) event in Portland, you might encounter what looks like a farmers market stand, with woven baskets full of fresh veggies, fruits and flower cuttings. Look a little closer and you might come across an “Abolish the Police Lettuce Mix” or a fruit basket with a hand-painted sign that reads “billionaires are not essential.” This is the PlantBloc booth, where everything is freely donated and given away by Portland’s gardeners and plant lovers to support the movement against racism, and justice for Black, Indigenous, and People of Color (BIPOC).

The Politics and Geopolitics of the Coup in Myanmar 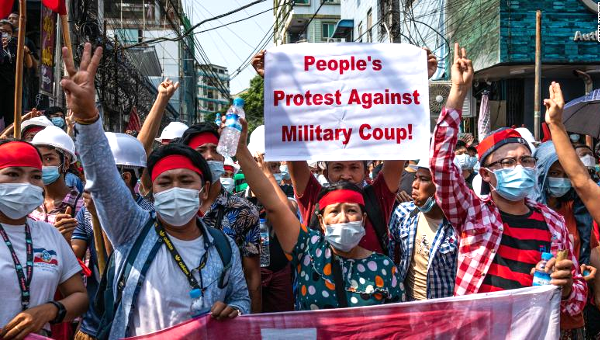 On February 1, 2021, Myanmar’s military – known as the Tatmadaw – invoked Article 417 of the 2008 constitution, dismissed State Counselor Aung San Suu Kyi, and arrested her and other members of her National League for Democracy (NLD) party. Condemnation of the coup was swift, although there would be reason for hesitancy in the reaction: Aung San Suu Kyi, who had been the face of the democracy movement until her release from house arrest in 2010, ruined her reputation when she came to the International Court of Justice in 2019 to defend her country’s genocide against the Rohingya people. No longer is Aung San Suu Kyi the unalloyed symbol of democracy and human rights. 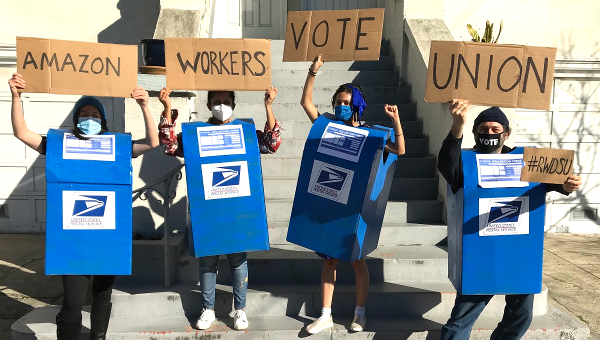 Thousands of warehouse workers at an Amazon plant in Bessemer, Alabama, are at the center of a potentially game-changing union vote taking place right now. On February 8, the warehouse workers were sent ballots by mail to decide over the next seven weeks if they want to join the Retail, Wholesale and Department Store Union (RWDSU). Just getting to this point was a major victory considering the aggressive union busting by the world’s largest retailer and the fact that employees are working during a pandemic. If workers vote affirmatively, they would have the first unionized Amazon workplace in the United States. 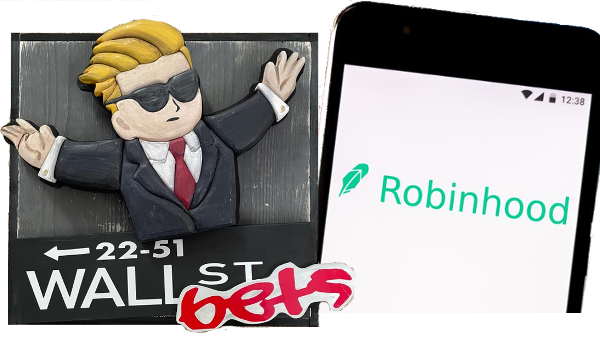 The recent GameStop story coming out of the US pushed arcane financial dealings into a prominence they rarely enjoy. The public was introduced to weird concepts such as “short selling and short squeezes” and, for a while, they are likely to be part of many zoom conversations. Not least because, whatever these strange things are, to many they appear to have delivered a rare victory to the little guys who cunningly used apps to hoist the captains of finance – who often refer to themselves as the Masters of the Universe – on their own petard.