Whereas:
– The Government of Canada plans to purchase 88 new fighter jets for a cost of $19 billion;
– The No New Fighter Jets Coalition has estimated the full life-cycle costs of these new fighter jets to be $76.8 billion;
– Public spending on new fighter jets would divert resources away from critical social services, environmental protection and Indigenous communities;
– Canadian fighter jets have been used to bomb infrastructure and kill people;
– Former Deputy Minister of National Defence, Charles Nixon, asserted that purchasing new fighter jets were unnecessary to protect Canadian national security or sovereignty;
– There is no plan to offset the greenhouse gases from the new fighter jets, which will prevent the Government of Canada from decarbonizing and meeting its Paris Agreement target;
– The Department of National Defence is the largest emitter of greenhouse gases (GHG) among all federal departments, yet all military vehicles and operations are exempt from the federal government’s GHG emission reduction plan; and
– Recently, more than 100 Canadians across the country engaged in a fast to oppose the federal government’s plans to purchase new fighter jets.

We, the undersigned, citizens and residents of Canada, call upon the House of Commons to:
1. Cancel the $19 billion competition to purchase the 88 new combat aircraft;
2. Include all of the carbon emissions from the Department of National Defence’s military vehicles and operations in the federal government’s GHG emission reduction plan and net-zero plan; and
3. Invest in a conversion plan that will create thousands of jobs in the green economy and the care economy to help transition Canada away from fossil fuels and armed force.

The Wilson Institute is proud to host, as part of its ‘Syndemic Series,’ Andreas Malm of Sweden, author of Corona, Climate, Chronic Emergency, one of the outstanding contributions to critical understandings of the 2020-21 pandemic. We’ll be discussing his most recent work and how it connects with the underlying hypothesis of a “metabolic rift” now separating humanity from nature. What should be done in the future to prevent future pandemics?

Banning the Bomb, Smashing the Patriarchy

Please join us for the Canadian launch of Ray Acheson’s new book Banning the Bomb, Smashing the Patriarchy. Ray is the Director of Reaching Critical Will, the disarmament program of the Women’s International League for Peace and Freedom (WILPF) and has written this important book on new nuclear disarmament.

The story in this book offers a look inside the antinuclear movement and its recent successful campaign to ban the bomb. From scrappy organizing to winning the Nobel Peace Prize in 2017 and achieving a landmark UN treaty banning nuclear weapons, Ray Acheson narrates the journey of the International Campaign to Abolish Nuclear Weapons and developments in feminist disarmament activism.

On Sunday May 30, the Central Committee will host the 100th Anniversary Celebration marking the birth of our Party in Guelph, Ontario on May 28, 1921. That historic and signal event for the working people in Canada took place in conditions of illegality and secrecy due to the War Measures Act, left in place after WW I to prevent revolutionary-minded workers from organizing a Communist Party in Canada and another confrontation like the 1919 Winnipeg General Strike. The WMA didn’t stop history however, with several general strikes since, and a Communist Party that has a glowing history and a growing membership.

Tribute to the Revolutionary Activism of Ernie Tate

Ernie Tate believed capitalism is a cruel and unjust system that has to be changed. Ernie was born in Belfast, Northern Ireland, in 1934 and emigrated to Canada in 1955. As a Marxist, union activist, and revolutionary, Ernie spent his life organizing against the war in Vietnam, in union struggles at Toronto Hydro, protecting universal healthcare and living wages, and much else. Ernie, along with Tariq Ali, was a leading organizer of the Vietnam Solidarity Campaign in Britain, worked for Bertrand Russell’s International War Crimes Tribunal, and was a founding member of the International Marxist Group in Britain. In 2014, Ernie published a memoir of his life on the far left in Canada and Great Britain called Revolutionary Activism in the 1950s and 1960s. This two-volume memoir is an important resource for anyone interested in a gritty account of mid-20th century revolutionary movements. It has been a source of information for the 2020-2021 Undercover Policing Inquiry hearings, taking place in England, in which the illegal and immoral activities of police agents in infiltrating the left have been laid bare.

On June 3rd., ADBCC – The People’s Residence welcomes you to a glimpse of the future. What will the permanent home of The People’s Residence look like? What is progress? Who are the folks behind this exciting project? Will it be cutting edge, state of the art, accessible, green, and people friendly? How magical are the numbers 756? Join us as we travel virtually into the future. Spread the word and be part of legacy making.

Trouble in the Garden: A Discussion with the Filmmakers 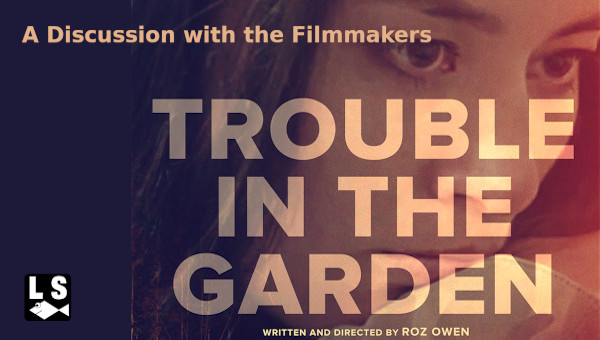 A discussion of the politics of Trouble In the Garden, with filmmakers Roz Owen and Raven Sinclair. Bailed out and taken in by a brother she hasn’t seen in years, an Indigenous protester and her adoptive family reckon with betrayal of love, land, and blood. Trouble In The Garden is the story of an estranged family caught in the wake of the 1960s Scoop. This dark secret of recent Canadian history has parallels in the US, New Zealand, Australia, and other colonized countries around the world. Watch the film in advance (for free on CBC GEM) and then join filmmakers Roz Owen and Raven Sinclair to discuss their collaboration, the 60s Scoop and related issues of injustice and reckoning the film raises.

The West Is Practicing Vaccine Apartheid at a Global Level 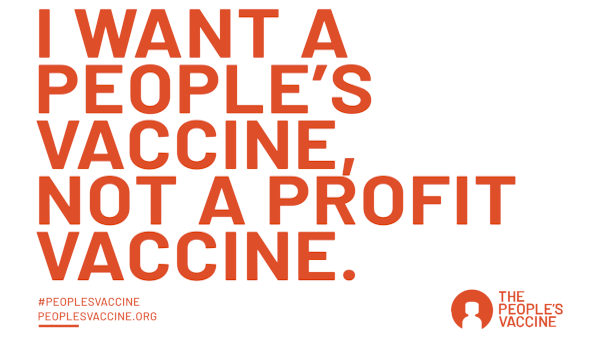 More than an eighth of the world’s population living in rich countries – the United States, Canada, the UK, and the EU – have access to more than 50 per cent of the world’s vaccine doses. According to Our World in Data, about 112 million people in the United States alone received at least a single vaccine jab by April 8. This is more than 12 times higher than the total number of people vaccinated in the entire continent of Africa – which has four times the population of the United States. On April 8, the World Health Organization (WHO) said that “nearly 13 million of the 31.6 million doses delivered so far [to 45 African countries] have been administered.”

Women and Nature: Toward an Ecosocialist Feminism 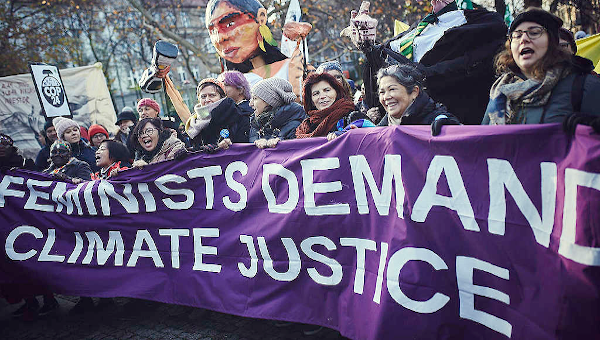 It was hot outside that day. In the remote area of KwaZulu-Natal Province, South Africa a young man watched as five men approached him on the porch. “Could we have a drink?” one of them asked. As they finished the water they asked if they could go inside and thank the woman that lived there. The young man led them in the front door. Moments later shots rang out as the men gunned down the young man’s grandmother and environmental organizer, Fikile Ntshangase, and raced out. 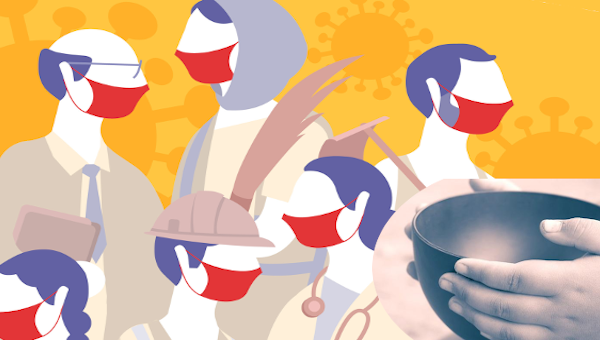 As Indians continue to scramble for survival through a deadly second COVID-19 wave and deal with an inadequate healthcare system that has failed them at every step, for a majority of the country living in rural areas and in slums in urban centers, food insecurity is proving to be a bigger struggle than protecting themselves against the deadly virus. In one of Asia’s largest slums, Dharavi, Mumbai, putting food on the table is proving to be a pressing challenge for the population of about one million living in one of the most densely populated areas in the world. “Hunger is a major problem,” says Nawneet Ranjan, founder of the nonprofit Dharavi Diary (Gyanodaya Foundation), who has been working in Dharavi for the last several years.

Radicalism and Disability Struggles: The Political Life of ET Kingsley 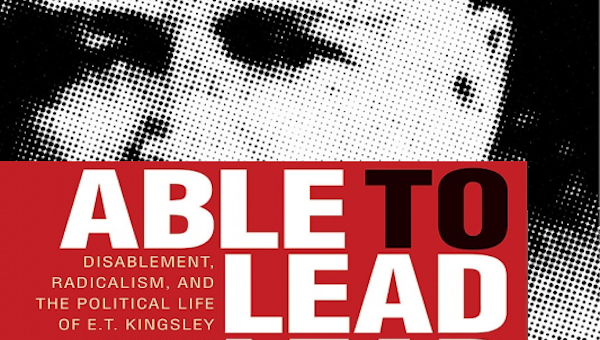 By Ravi Malhotra and Benjamin Isitt

On 15 October 1890, Eugene T. Kingsley’s life changed dramatically and irrevocably. The political trajectory of the North American working class would change as well, even if Kingsley was not cognizant of his destiny. He was working as a brakeman on the remote Spring Gulch line of the Northern Pacific Railroad (NPR) in rural Montana, which had just been admitted to the United States as a state in November 1889. Sparsely populated, this was frontier country, and the NPR transcontinental line had been completed through Helena only in 1883. Kingsley, nearly thirty-four and a married father of two young boys, was injured when he fell between two moving cars. He was rushed to the NPR hospital in Missoula, and his left leg had to be amputated between the knee and hip and the right leg between the ankle and knee.