End All Economic Sanctions Against Cuba

Petition to the Government of Canada.

Whereas:
– The Government of the United States wages an economic war against Cuba, which is the principal obstacle to Cuba’s social and economic development, causing damages exceeding $100 billion;
– The Government of the United States pressures and coerces other countries to participate in its more than 60-year economic war against Cuba;
– The Government of the United States relentlessly organizes, finances, and orchestrates a campaign of disinformation, aggression, and subversion of Cuba’s legitimate constitutional order;
– U.S. economic sanctions, constituting an economic blockade, and the campaign of subversion against Cuba are a violation of international law, the right of self-determination and the human rights of the people of Cuba; and
– The international community, including Canada, repeatedly rejects the economic war against Cuba through overwhelming votes in the United Nations General Assembly and in other international forums.

We, the undersigned, citizens and residents of Canada, call upon the Government of Canada to:
1. Request an end to all economic sanctions against Cuba;
2. Ask that the Government of the United States cease its campaign of subversion, hostility, and aggression against Cuba;
3. Request that the Government of the United States remove Cuba from the U.S. Department of State’s State Sponsors of Terrorism list;
4. Take immediate steps and actions to preserve Canadian sovereignty, ensuring Canadian companies and other entities do not participate in U.S. economic sanctions against Cuba through, inter alia, the enforcement of the Foreign Extraterritorial Measures Act; and
5. Ensure that Canada’s relations with Cuba are based on equality and the respect of sovereignty, independence, and the right of self-determination.

When: November (check the listings)

This year’s festival has 16 short films (see a full list with descriptions) that will surely captivate film enthusiasts. A thoughtful selection of documentaries, comedies, and dramas will grace home screens. Location Coordinators across Canada will have the option of organizing local events that meet public health requirements.

World leaders will meet in Glasgow in November at the global climate talks, COP26. The Toronto Global Day of Action for Climate Justice is being organized by a coalition of labour, environment, and justice organizations and individuals in Toronto. This local event is part of mass mobilizations across the world, bringing together movements to build power for system change – from Indigenous struggles to trade unions, from racial justice groups to youth strikers.

When: November 7 to 10
(Digital events are online, free)

From the 7-10th November 2021, as world leaders meet to discuss our future, the COP26 Coalition will host The People’s Summit for Climate Justice.

The decisions made at COP26 will shape how governments respond (or not) to the climate crisis. But justice won’t be handed to us by world leaders or delivered by corporations. Only we can imagine and build the future that works for all of us. The solutions that we need already exist and are being practiced, but governments lack the political will to act. Indigenous and frontline communities have known the solutions for centuries.

This jointly-sponsored one-hour webcast assembles six experts to reflect on Canada’s climate record and future performance in the context of the COP26 climate summit in Glasgow. In brief segments of 5-10 minutes, our experts answer these key questions:

· What is COP?
· How adequate is the Liberal government’s climate strategy?
· What is the history of Canada’s broken climate promises?
· What are the challenges, in light of the IPCC’s projections on emissions?
· What is being achieved in Glasgow?
· What can we do to promote a livable future?

Moderated by Richard Sandbrook, President of Science for Peace. zoom.us

What is the Haiti Core Group?

The Canadian government is part of a racist colonial alliance in Haiti.
The Core Group (US, Canada, France, Brazil, Spain, Germany, EU, UN, OAS representatives) has heavily shaped Haitian affairs and has overseen the descent of political life in Haiti.
Recently the Core Group effectively selected the country’s prime minister through a press release.

Deconstructing Electric Vehicles on the Eve of Glasgow COP26 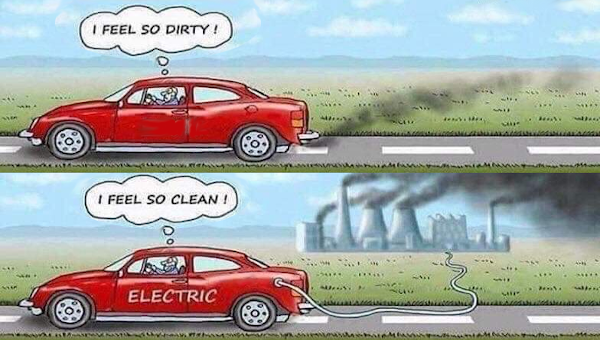 A lead human-interest story in the weekend Wheels section of a major Canadian newspaper describes a 2-car family’s transitioning from a hybrid to an EV as they “try to be more sustainable.” They upgrade their daily car every few years to seek “improvements in fuel efficiency, reliability and technology.” Electric vehicles (EVs) are feted by the automobile and ecojustice sectors as part of the “just transition” to a future “carbon-neutral,” happy, dignified quality of life. 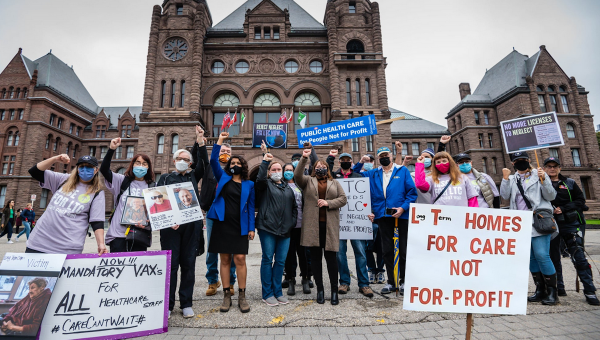 It has been a year-and-a-half since CBC exposed that the Doug Ford government cancelled the annual surprise inspections of long-term care homes after it took office in 2018 and 17 months since Premier Ford promised to reinstate those comprehensive inspections. Yet, the announcement on October 26, from the Ford government’s Long-Term Care Minister Rod Phillips is again long on PR, but explicitly does not commit to finally reinstating the annual comprehensive inspections.

‘No way back’ to Military Dictatorship Declare Sudanese Activists 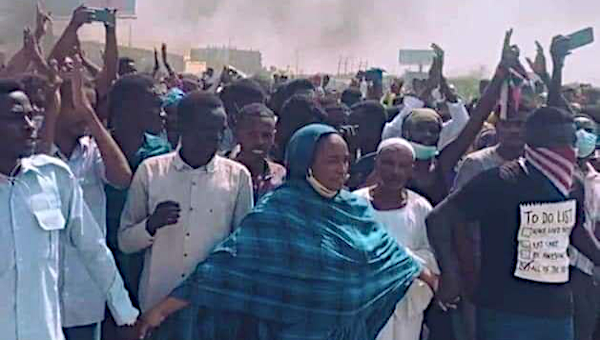 By Anne Alexander and Irang Bak

The coup launched by Sudanese military leaders on the morning of 25 October is being resisted by mass protests amid calls for total civil disobedience and a political general strike. After mass protests on 21 October, General Abdelfattah al-Burhan dissolved the government and military units took Prime Minister Abdalla Hamdok away to an unknown location. He is being supported by the Rapid Support Forces, led by Mohamed Dagalo, also known as Hemedti, a militia commander responsible for a major massacre of protestors during the popular uprising in 2019. 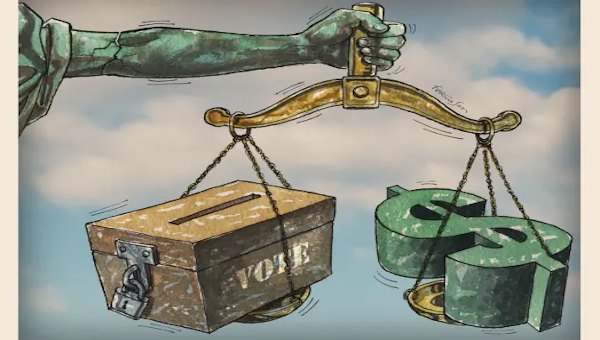 On 20 September, 2021, Canadians voted to hold the line. While forty seats changed hands, the number of seats won by each of the parties was so close to the ones they already held that the overall outcome was startlingly similar. Once again, the Liberal Party will form a minority government that will have to depend on the support of other parties to get its programmes and policies implemented. No substantial change. The leader of the Bloc Quebecois was heard to mutter that the election surely had not warranted the interruption of people’s barbeques. 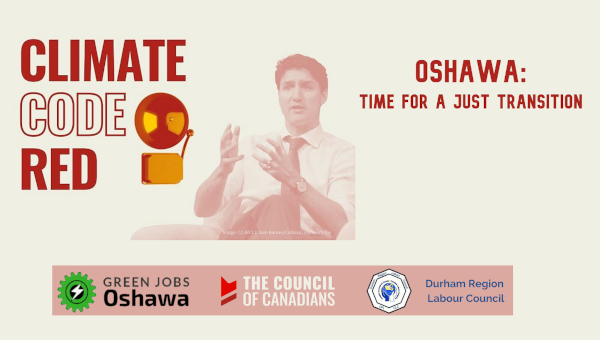 Scientists have issued a “code red for humanity” to tackle the climate crisis, but governments continue to let corporations call the shots. Together, we can break the grip of corporate influence. Organize our communities to pressure MPs to support just transition legislation. Green Jobs Oshawa is organizing in support of a just transition here in town and across the country.

Do you want to be an integral part of a dynamic and creative coalition, with great opportunities for learning, working for environmental and social justice in solidarity with Indigenous peoples and mining-affected communities?

Interested applicants are invited to submit a cover letter, resumé, and two writing samples, one in French and one in English, as one document to Diana Martin at diana@miningwatch.ca by November 14, 2021.