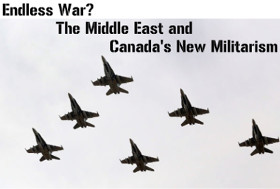 In 2003, the U.S. and its allies invaded Iraq on false pretenses and left the country in ruins almost a decade later, creating the conditions for ISIL’s ascension in the region. Now the U.S. is spearheading a campaign to return to Iraq and enter Syria to fight off ISIL. Canada has heeded its neighbour’s call for support and is already on the ground “helping” with the mission. Canadian reinforcement for U.S. imperial endevours around the world is standard procedure, but Canada has its very own imperial strategy as well. A new foreign policy stance has led to interventions in Afghanistan, Haiti, Libya, and Mali, among other places.

Canada is (again) intervening in the Middle East with fighter jets, logistics, forward bases, and other supports. This is another escalation in the ‘new militarism’ that is dominating Canadian foreign policy and increasingly, society. Can the intervention succeed even on its own militarist terms? What are the alternatives for the anti-war movement?

In the midst of the conflict is the besieged city of Kobane, part of the Kurdish region of Rojava in northern Syria. Two years ago Syrian Kurds declared autonomy and set up a system of direct democracy called “Democratic Confederalism.” What is happening on the ground and how can the Left support the Rojava Revolution and Kobane?

When: Sunday December 13th, 2pm A second wave of the pandemic is raging across the country, and Toronto and other cities are again in lockdown. Austerity for social provisioning including public transit is high on the agenda for city governments across North America. In Toronto, both the city government and the Toronto Transit Commission are […]